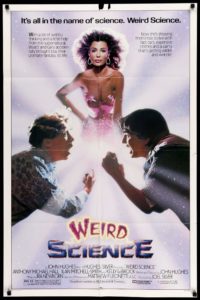 This is, in my opinion, one of the best John Hughes films out there. 1985’s Weird Science appealed to the rich, privileged kids with computers, who managed to figure out how to hack computer networks and create an incredibly hot woman from a Barbie Doll.

Starring Ilan Mitchell Smith and Michael Anthony Hall as two kids who were considered losers and dorks, and throwing in the beauty of Kelly LeBrock, it was an instant winner in my book. And besides, Bill Paxton gets turned into a giant turd! That was worth it right there!

This is a must see for young boys of the 80’s, people who want to step out of their geekdom and want to be “cool” – and then realize that, no matter what, it’ll never happen like this unless you have Oingo Boingo writing your theme song and a hot woman who can manipulate time and space to help you become who you want to become.