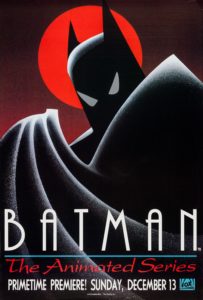 This was, perhaps, the BEST animated series done in the 1990’s. The stories were fresh, the characters, while known, were sinister, and even some new characters were created specifically for this show. It made a second name for Mark Hamill, as people who had known him before as Luke Skywalker got to hear him be the sinister villain, The Joker, for the first time. People now associate Mark as the definitive Joker, and Kevin Conroy as Batman, because of this show. And that’s not even the best part of this series, as the writing was more adult, more geared towards an older crowd, getting away from the campy, goofy Adam West and Burt Ward Batman series. Come along and join us this week as we discuss one of the greatest animated shows of all time, Batman: The Animated Series!