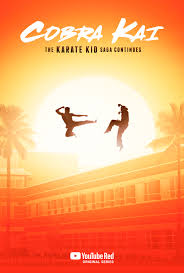 1984 – The All Valley under 18 Karate Championships are taking place, and involve a snarky upstart kid from Jersey, who moved to Reseda, and the blonde haired, perfect asshole type you could absolutely hate, coming together in a battle for the Championship.

Daniel LaRusso and Johnny Lawrence faced off, with LaRusso being the winner in The Karate Kid.

But in this new series, we follow Johnny Lawrence, 30 years later, as he decides to open his own karate school and teach kids how to fight. We also get to see the rivalry between LaRusso and Lawrence; LaRusso became a successful auto dealer, and Lawrence, a maintenance man trying to recover his life from what seems to be a drunken haze of mistakes and relying on his verbally abusive stepfather’s money.

So come listen to us as we (SPOILER ALERT! WE GIVE AWAY SPOILERS!) discuss Youtube Red’s Cobra Kai!