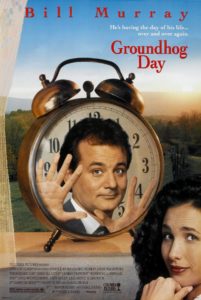 It’s that time of year again.

Such was the subject of Bill Murray’s hilarious movie hit, Groundhog Day, in which a TV reporter is sent to Punxsutawney, PA, where he feels his talent is being wasted on capturing “the true excitement of a large squirrel predicting the weather.”

Instead, he is caught in an infinite loop, over and over again.

Come hear us talk about how we felt about this film, Groundhog Day, on this week’s episode of TBMG!