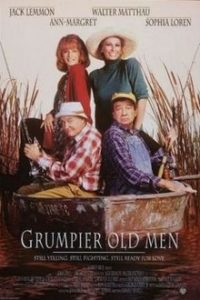 This week is a double feature, where we discover Burgess Meredith was one dirty old man!

Yes, we discover that Chuck’s gonna take ol’ one eye to see the optometrist, aka Ann Margaret, and we also learn that Burgess, in talking to Sophia Loren, went to the Island of Kahmaniwanalaya (Say it slowly, don’t hurt yourself).

Walter Matthau and Jack Lemmon fight over a beautiful woman, and then we get a sequel several years later, where another beautiful woman shows up; listen to us as we talk double feature for this film group!