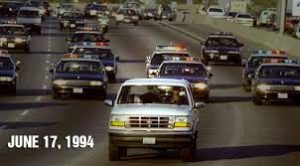 June 17th, 1994 – Probably the biggest highlight of the year, as we look back in television history. A White Bronco holding Orenthal James Simpson, running from the law in a low speed chase to Brentwood, was what everyone was watching, instead of the pay-per-view event of David Hasselhof’s singing career as he tried to make a name for himself here in the United States after Knight Rider was over.

These are just a few of the things we cover from 1994; join us in our discussion from 20 years back on this week’s episode of Talkin’ Bout My Generation!