When the City of New Y 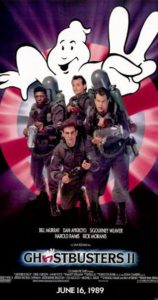 ork has a river of purple slime running through its subway tunnels, and the city is being overrun by a creepy guy stuck in a painting who wants to take over a baby’s body, well, things need a little rethinking. I mean, even for New York, it was a little weird, right?

So come this week as we talk up the sequel Ghostbusters II!