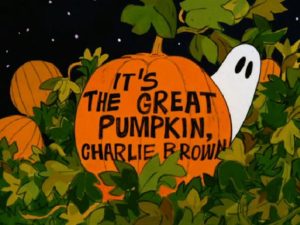 Back in the 1960’s, Charles Schulz had a great idea. He wanted to air some television specials of his comic strip, Peanuts, displaying the skills of animators at the time, and building his brand. One of his favorite stories involved Linus, who believed in a Great Pumpkin, that would arise out of a pumpkin patch and bring toys to kids, rather than going out dressed up and getting candy.