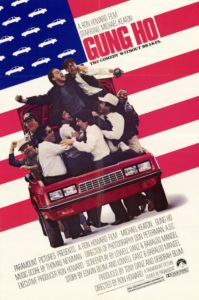 In the late 70’s and early 80’s, the Japanese were at the height of building a new car society. Toyota, Isuzu, Subaru, Mitsubishi, Datsun – they were all crossing over the Pacific from Japan and be bought by Americans looking for better gas mileage, and something that would last a little longer.

In this week’s episode of Talkin’ Bout My Generation, we go back to 1986 to cover a Michael Keaton film involving the fictional Assan Motors, which had closed a plant in Pennsylvania and was considering reopening it. Gung Ho is the comedy movie based on that battle to keep the plant going, to help a small town, and to make us laugh with the “Japanese invasion” and Asian culture mixing with “whitebread America”.