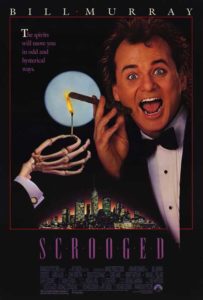 This week marks the start of our Christmas holiday podcast season, and what better way to start than a movie where Carol Kane hits Bill Murray in the face with a toaster?

Yes, folks, this week, we’re delving into the holiday film Scrooged, which is a more modern version of Charles Dickens’ A Christmas Carol. Bill Murray, a television exec, is set to do a live performance of the film on his network, and is working through that as he’s visited by his 3 ghosts.

Scrooged is our topic of choice this week on Talkin’ Bout My Generation, so join in and have a listen!